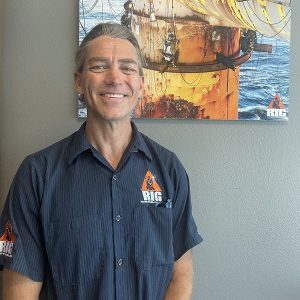 Andrew is the father of three wonderful twenties-something children and grew up in Kennewick, WA. It was here, by playing Little League Baseball for the Lampson Crane team, that he had an early introduction to cranes and rigging. The familiar blue Lampson Cranes are some of the largest in the world and are built in Kennewick. Andrew has always found it interesting that playing Little League was the seed of his rigging career.

As a young man, Andrew grew up with a tape measure in one hand and a Skilsaw® in the other. Whether framing a house, erecting a steel building, rigging a production show on stage, or in a convention center building a trade show booth, construction has been a part of his life for over 30 years.

Andrew started working in the event industry as a stage-rigger in 1997. A year later, he became a member of the Las Vegas stagehands union, IATSE Local 720. Rigging was a natural fit for him as he was able to put the construction and leadership skills he developed as a young man to good use.

As a certified arena rigger (through the “Entertainment Technician Certification Program,” ETCP—the entertainment industry standard for event riggers), Andrew designs and manages the rigging for events in arenas, convention centers, and stadiums throughout Las Vegas and different regions of the United States.

In 2011, Andrew became the “Production Rigger” for the Thomas & Mack Center, the 18,000-seat arena on the University of Nevada Las Vegas (UNLV) campus.  Safety management is the overall responsibility for this leadership position.  Qualification’s that are requirements for this job include, reviewing load-calculations, developing the rigging plans pertaining to how the theatrical equipment is to be rigged to the roof of the building, strategizing and planning how the rigging tasks are going to be accomplished, staffing rigging crews, teaching and training new riggers.  He is also responsible for venue maintenance and on-going inspection of rigging-pertinent equipment.

And while overseeing the rigging for the Thomas & Mack Events Center, Andrew spent three years as Production Resource Group’s (PRG) rigging manager for the Sands Expo Center and the Venetian and Palazzo Hotels, some of the busiest event properties in Las Vegas.

Andrew is proud of the fact that over the years he’s helped safely rig 9 National Finals Rodeos (at the Thomas & Mack Center, La Vegas, NV), the Miss Universe Pageant (in Moscow, Russia), and the 2002 Winter Olympics (in Salt Lake City, UT). These are just a few of the many memorable entertainment industry events in which he’s been involved.

Andrew has a long association with Industrial Training International (ITI) where he became a certified “Master Rigger” (a certification he keeps current), and completed their “Rigging Hardware Inspection” and “Rigging Accident Investigation” courses. In collaboration with ITI and the entertainment-rigging icon Rocky Paulson, Andrew co-created the first of its kind, online entertainment rigging education course, “Basic Entertainment Rigging & Inspection.”

Andrew enjoys speaking on the topic of entertainment rigging and has addressed UNLV classes as well as the American Society of Safety Engineers (ASSE). He’s written articles for the entertainment industry magazine, PROTOCOL (on rigging education and the importance of training), and is a regular contributor to the trade show magazine, EXHIBIT CITY NEWS, where he writes a column entitled “The Rigging World.”

To top it all off, Andrew has a 30-year background in adventure, and as a climbing guide has climbed throughout the western United States, Alaska, and Europe. He’s rounded out his “at height” adventuring by taking up paragliding, where he loves the experience of launching from mountaintops and soaring through the skies while supported by rigging!